It's been how long since I wrote?

The youngest -- moved home and dumped "Osama bad-boyfriend". I am sure he's a catch (for someone else), and I'm sure he is a wonderful "boy", but that's the thing -- he's a boy. He wasn't finished growing up yet and he needed to. Meantime little one moved back about a year ago. She's since met a great guy and has just moved out for a job out of Calgary (in Fort Mac). She's going to be fine.

My son -- the photographer -- continues to amaze me with the creativity and things that he does. He's brought me a whole load of light fixtures to install and update the place. His photo's and video's are amazing.

My oldest moved to the west coast and is now going to be a "momma" herself! Making me a "Grandma" for the first time! It's been a challenging journey with her, but one I am sure will make sense to her once she's holding a little one in her arms.

It's been a challenging year or two!

now more good news is I finally have a "sewing room" to myself! I have had a bookshelf and a table to serve as the "sewing area" in the office or spare room, but this is just for ME! Amazing! (and funny how I'm blogging about it now! ha!) Great green walls (like the top of my banner -- lime green/yellow green). Brings in amazing light! Will take photo's when I have a chance and post. I searched sewing rooms to see what they look like. I found most quite dark and jam-packed full of "stuff". I'm the neatnick, so having "stuff" spilling out over shelves and the like was a bit daunting. The other thing that I found was interesting is the amount of money people spend on their "sewing" stuff. Seriously, I probably have the oldest sewing machine going (I got it when the oldest was a baby!) -- but the quilting that I do is no different than those that I have seen on line.

Question for you -- "can you tell by looking at a quilt (remember, no fancy stuff like embroidery and the like) whether it was made by a Bernina, Brother, whatever?"
Posted by Margo at 8:58 AM No comments: Links to this post 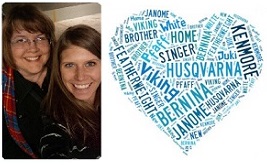